MoT's Watch Deal Forum is the resource for watch and watch accessory deals sourced by enthusiasts like you. Click here to join today, and once logged in you'll be able to take part in great discussion and camaraderie about the hobby you love.

As a reminder, even though MoT's is a free site, we do rely on two methods lights on. One is a referral generator that creates (mostly) unobtrusive links. This depends on the site being whitelisted in any ad-blocking software you use. If you could please whitelist this site, we would be ever thankful. (We promise there are no pop-ups, pop-unders or other annoying distractions.)

The other method is donations from members and visitors. These are completely voluntary and there is no obligation. Any donations go directly towards site operations and are greatly appreciated. Click here to donate today.

A few months ago, Blueshark released what they called "Pajama Straps". These were single pass NATO style straps, but made with the paratrooper style straps used by the MN straps, Watch Steward straps, etc.

Didn't take long, but a very similar design showed up on Ali Express in similar colors. Might be like some other Chinese straps in that I suspect sometimes these "clones" are actually the same thing without the branding. Right now, instead of the $32 you'd pay for the Blueshark, you can order these for under $12 here.

Just got this today, so don't have a long term opinion, but initial impressions are very good. The hardware is nice, and it even has a sliding first keeper. I really like this khaki color for the Citizen Avian. It's extremely comfortable, just like the other style parachute straps, but it's easier to install and fasten vs the hooks.

Concerns? A few. It's long at 280mm or so to the start of the buckle. That's fine for me on a two pass NATO, but on this one pass stretch strap, it has a lot of extra strap on my ~7.25" wrist. I don't know how the buckle holes will hold up if you swap it out a lot, as they kind of drag when installing the strap if you have a tighter lug to case watch.

Overall though, it's nice. I'd be happier if it were slightly cheaper for the AE version, but this is in line with the other paratrooper style straps. 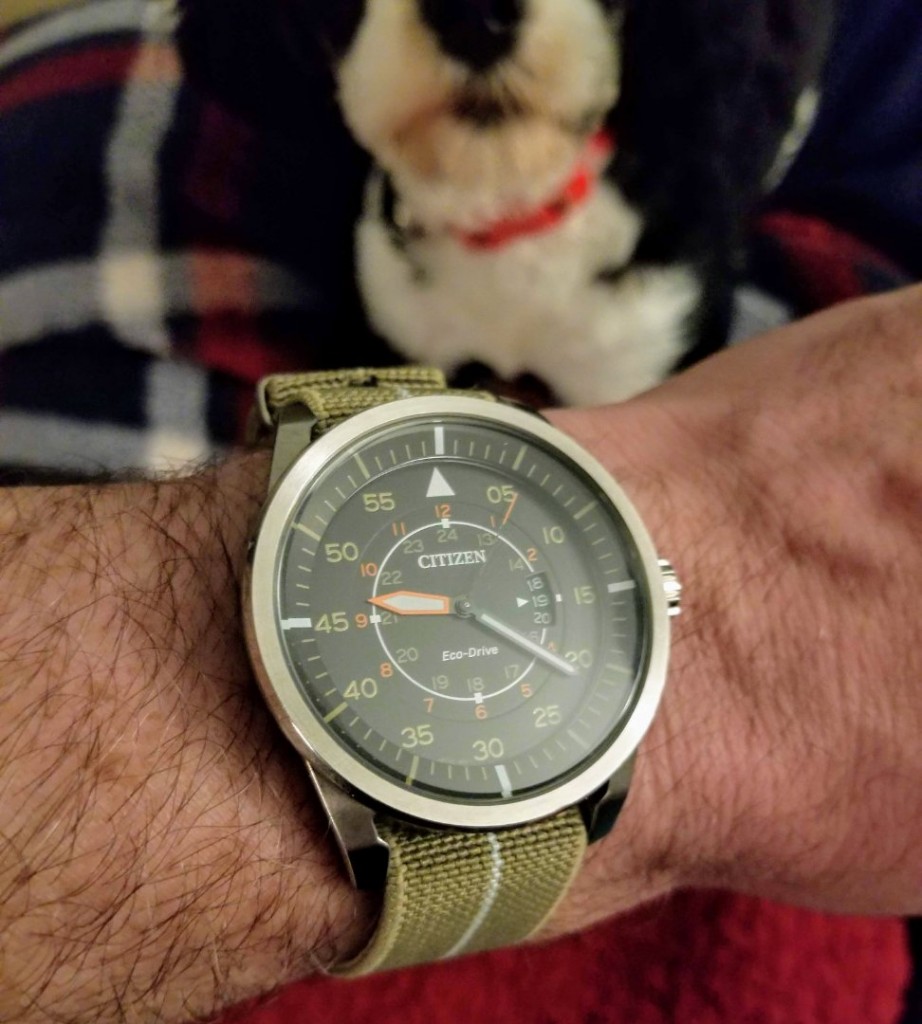 Excuse the dirty crystal above! I spotted them for the first time today too. Nice hybrid of two designs.

For UK members (or £5 p&p to everyone else), George's straps are a great source of these. His NATOs are the best I've seen.

These users liked the author Animal Mother for the post (total 2):
AndyS • ShoreFire77

For UK members (or £5 p&p to everyone else), George's straps are a great source of these. His NATOs are the best I've seen.

I think that's even a different style. That's more of a traditional two pass NATO based on that picture (note the 3 keepers), vs the one I posted that's a one pass strap (two keepers).

From the pictures, I suspect it's exactly the same material in regards to the strap. These even have a few colors that they don't offer in the "pajama strap" style on Ali Express, but the same company does have in the MN style (I'd like a black with red stripe for my Nighthawk).

Good that there are a lot of options, though.
Top

Got another couple during the sale: These users liked the author AndyS for the post (total 3):
yinzburgher • watchpalooza • Klaatu3

These are down now to under $9 with the current Ali Express sale. I think several people have ordered them after I posted that in the deals thread. Would be interested to see more reviews to see if others enjoy these like I do.

These users liked the author AndyS for the post:
VCheng

Cheapestnatostraps.com now have this style strap for $10.

These users liked the author AndyS for the post:
yinzburgher

Since you're new here, I'll cut you some slack this one time.

Firstly, this is off-topic for this thread.

Secondly, if you'd like to sell to my users, please post in the Watches and Accessories For Sale forum using the guidelines that can be found at this link.

'You don't have to burn books to destroy a culture. Just get people to stop reading them.' - Ray Bradbury
'Freedom is hammered out on the anvil of debate, discussion, and dissent.' - H.H.H.
Top
Post Reply
8 posts • Page 1 of 1

Return to “Straps and Accessories”