MoT's Watch Deal Forum is the resource for watch and watch accessory deals sourced by enthusiasts like you. Click here to join today, and once logged in you'll be able to take part in great discussion and camaraderie about the hobby you love.

As a reminder, even though MoT's is a free site, we do rely on two methods lights on. One is a referral generator that creates (mostly) unobtrusive links. This depends on the site being whitelisted in any ad-blocking software you use. If you could please whitelist this site, we would be ever thankful. (We promise there are no pop-ups, pop-unders or other annoying distractions.)

The other method is donations from members and visitors. These are completely voluntary and there is no obligation. Any donations go directly towards site operations and are greatly appreciated. Click here to donate today.

Consider this a “pre-review” post, to become a review thread after I get the item.

So, I posted in the HUISABH deals thread about a sale on Lucky Brand watches on their own site, including the chronograph I just ordered yesterday for $50…

…and they’re already on my bad side.

After placing my order, do I get a courtesy acknowledgement or “thanks for your order” email from Lucky? Or a “we’ll let you know when it ships” message? Nope, the first thing I get from them is some email asking “Hey What’s Up…how’s our website?” They’re already spamming me before they’ve even filled my order. That gets on my nerves. I get the feeling I’ll be paying for the $ savings in spam frustration.

Feel free to get a head-start commenting on my folly.

Honestly, I have trepidation about ordering a watch from a blue jeans company in the first place. But then again, their business model is similar to Jack Mason, and I love my JM aviator chrono. So I took a chance. We’ll see. At least the photo looks nice: These users liked the author Klaatu3 for the post:
TheJohnP

So I received the watch in about 4 calendar days, which is not bad. Shipping was $5 by UPS, and no other options were offered. That was fine, but communication from Lucky Brand was poor. I received no order acknowledgement or estimated delivery info from them. Only a heads-up email from UPS (via my UPS My Choice account) forewarned its arrival.

The Fairfax Racing watch is unmistakably a fashion watch, and feels like one. Its 40mm case is lightweight, lacking the heft of my Jack Mason aviator chrono (to which I compare due to similar vendors and list-price point). Case sides are brushed, and the bezel face is polished. Packaging is meager…a branded paperboard box with an undyed canvas pillow. No instructions were included with the watch. The large orange center-seconds is the running seconds hand. Three subdials: at 3 o-clock is a 24-hour hour indicator which matches the watch time (not like a GMT function). At 6 o-clock the small orange chrono seconds, and at 9 o-clock the chrono cumulative minutes up to 30. Interestingly, after using the chrono feature, when resetting the hands, to return to zero they spin backwards the number of cycles they just ran. For example, if you just measured 3 minutes 25 seconds, the small minute hand will move backwards 3 increments, and the small seconds hand will spin back 25 secs and then three full CCW rotations. Not sure if this is common in quartz movements. There is no day or date function. There is greenish lume on the hour & minutes hands and small dots at each hour marker, but the glow is neither bright nor long-lasting.

Another chrono note: just as seen in the stock photo (in my first post), on arrival the small chrono seconds was not correctly zeroed to 12 o-clock. But it can be recalibrated using the crown and pushers, which I figured out by trial & error.

Quartz accuracy is boringly good as would be expected. The website states the movement is an Epson VR34. So far, it’s favorably tracking to a Victorinox (Ronda) that I would trust with my life. 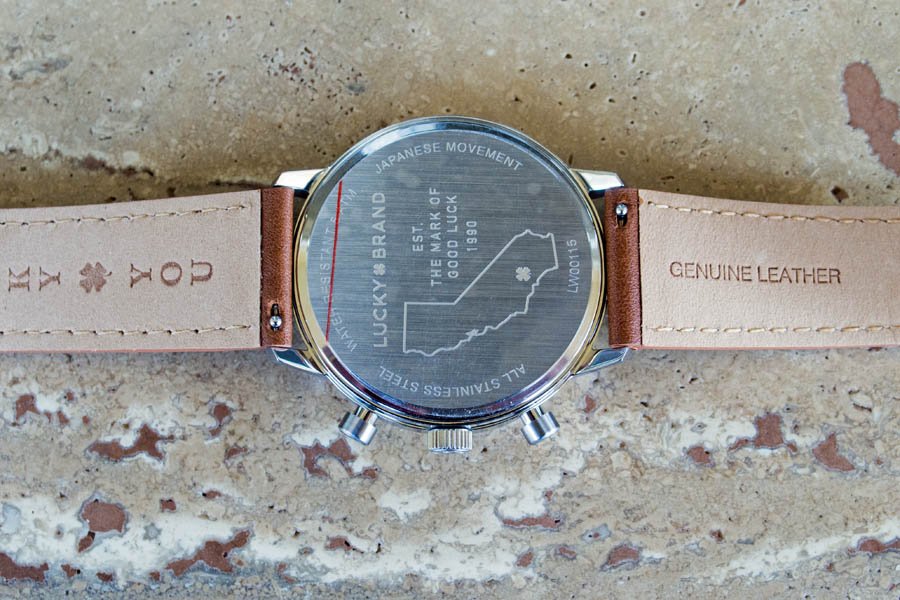 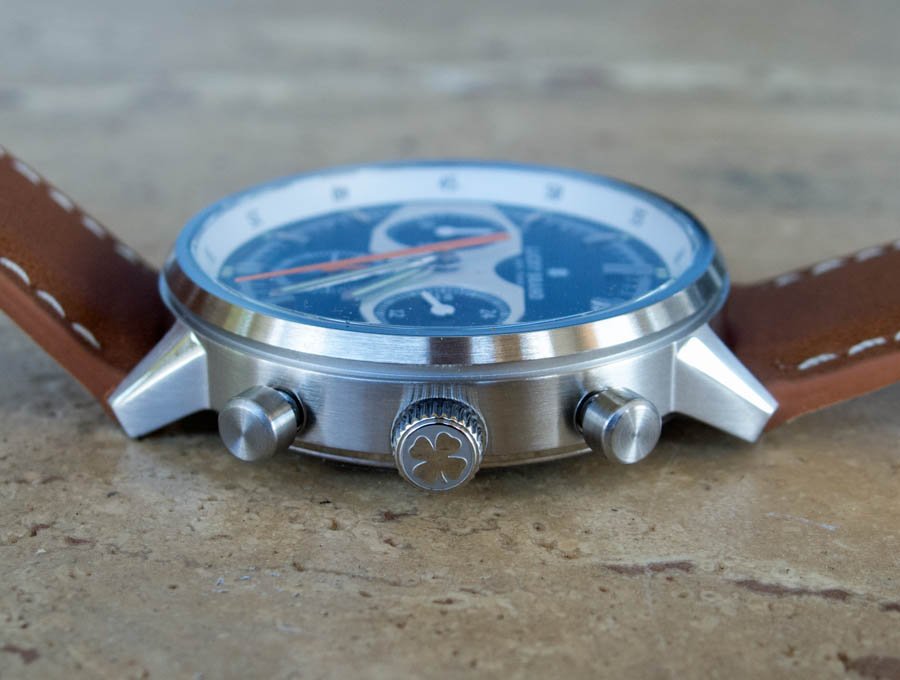 The photo of the snap-on caseback reveals the advertised features, such as water resistance (5 ATM or 50 meters), “all stainless steel” case, Japanese movement, and a map of California marking the company’s L.A. headquarters. Curiously though, the package I received was actually posted from Kentucky! No claim is made about the (flat) crystal, but from the feel I’m guessing thin mineral or maybe plastic (?). The cloverleaf-engraved crown does not screw down. On the plus side, the styling is attractive, being based on vintage racing design. In the right lighting, the blue-green sunburst dial really pops (wrist photo). Unfortunately, this photo also shows the watch’s two most annoying qualities. First, though I usually make it a rule to avoid watches with low contrast between the hands and the dial, in this case I made an exception, and sometimes it’s a strain to tell the time quickly and without glasses. The silver/white hour & minute hands clash with the white outline of the subdials between 2 & 4 and 8 & 10. (To be fair, this shot added another wrinkle…the time was 4:22 pm, so the minute hand obscures the hour.) The second most annoying trait is the misalignment between the dial hashmarks and the running seconds hand. Not only does the hand routinely miss every single hashmark, it falls almost exactly at the midpoint between the marks—about as bad as you can get.

The quick-detach 20mm soft “genuine leather” strap is nothing special, but is branded as is the polished stainless clasp. I think I may swap to a nice, perforated racing strap to dress it up a bit.

At a $50 sale price, overall the quality is passable but unimpressive. I can’t say I’d recommend one. You could find any number of as-good-or-better Chinese branded watches for half the price. Still, I’ll probably keep it for now, as resale would be low and I don’t have any other comparable racing-style chronographs (but haven’t ruled out better watches). It might even draw the occasional compliment.

As for the Lucky Brand spam emails: so far I’ve received two. I’ll keep watch on my inbox and unsubscribe if it gets annoying.

These users liked the author Klaatu3 for the post (total 2):
Split-Time • BostonCharlie

Thanks for the review. This is maybe the closest I would ever be able to come to a Tudor Heritage Chrono so I enjoyed reading your thoughts on it.

These users liked the author Boourns for the post:
Klaatu3

I wish that watch were 38mm
Top

Thanks for the review! There's a model available at Nordstrom Rack that has a blue dial and syringe hands that looks pretty attractive...but it's interesting to see your photos and realize that yes, you do get more than just a better movement when you buy a
"real" watch over a "fashion" watch--you get better overall finishing, as well. I got a chuckle out of the digital-style zeros on the chapter ring.

These users liked the author cheddar for the post:
Klaatu3

Boourns wrote: ↑
Sat Jul 06, 2019 8:16 pm
Thanks for the review. This is maybe the closest I would ever be able to come to a Tudor Heritage Chrono so I enjoyed reading your thoughts on it.

Sorry to hijack the thread.

Some others out there that should scratch your itch too if that's what you're after. These users liked the author Animal Mother for the post (total 2):
Boourns • watchpalooza